Hemorrhoidal Disease (HD) is acondition that affects many Americans. Read more about the causes and symptoms of it here.
learn more »

With our advanced system, internal hemorrhoid treatment can be as simple as a single office visit with no surgical procedures.
learn more »

Other procedures require general anesthesia and have a painful recovery period, but not the HET procedure.
learn more »

I have always integrated my love of teaching and academics in my practice. It was the reason that I started in Tampa Bay so that I could be involved with USF at first as a member of the adjunct faculty. I devoted time during the week to various teaching responsibilities and rose through the ranks to Clinical Professor, the position that I currently hold. Medical school students in the first and second year come to the office a day a week during their clinical education in being a doctor.

Over the years as adjunct and then full time faculty, I participated in teaching students and training resident physicians in the classroom, at the bedside, in the trauma bay, and the operating room. It has been very fulfilling and I have received recognition for teaching from the department of surgery and more significant to me from the students. A few notes can be found below.

At the end of each third-year clerkship, I was asked to evaluate the course, the professors, the attending physicians and resident physicians with whom I worked. These physicians, my curriculum and the experiences I had during my third year in medical school have been a source of inspiration and guidance to charge my clinical and mental acumen. It has been my point to consistently provide honest and thoughtful feedback about each of my encounters using the evaluation system provided to us as students, but after my surgical care clerkship, I feel compelled to write you a personal letter to emphasize my appreciation for a gem in our community, David S. Shapiro, M.D. He embodies the USF Health College of Medicine’s central purposes and core values.

Dr. Shapiro consistently demonstrated his commitment to teaching patients and students. For example, in a meeting with a patient with multiple lipomas (who had undergone several surgical procedures to remove them), Dr. Shapiro examined the patient’s gynecomastia and ordered lab work, which revealed an undertreated thyroid condition. Dr. Shapiro used that opportunity to not only address an issue which needed to be addressed, but emphasized to his students that a patient’s chief complaint may not be the most critical or only issue to address. The patient was engaged with Dr. Shapiro’s teaching (as were my partner and I). I realized that it was not only what he had to say but how he communicated that made him so effective.

Many students, after a long day in the clinic or at the hospital will go home and study. Our discipline demands such action. But Dr. Shapiro’s style made it such that were renewed daily with an independent desire to search for medical and scientific truths through scholarship, research and patient care. He consistently provided feedback to students in a timely and constructive manner for optimal learning and growth.

During a very short rotation, I was fortunate enough to have scrubbed in on several surgical procedures with Dr. Shapiro and experienced the exceptional vitality, leadership, and encouragement that springs from him in the operating room. Dr. Shapiro teaches by example, instruction and navigation. His clarity and originality have made all of medicine come alive for me. Dr. Shapiro has challenged me to think critically, to examine my beliefs and assumptions, to hone my clinical skills, and to develop a set of values to guide me through my professional journey. I have developed a deep respect for his scholarship and invariably find his work and teaching, classy and instructive.

And when we were not in the OR, on the wards, or in a didactic, Dr. Shapiro still proved to be intellectually astute, morally serious and open to engagement with students. He examines important questions with integrity, rigor and originality. He insists upon civility in debate and maintains respect both for evidence and for the rights of others. The future of surgery and the role of surgeons was an engaging lunchtime topic he had with a group of students for which I was a part. He frequently encouraged us by saying, “I look for the ability of my students to think independently, and I assess my students on the quality of their argument, not on whether I agree or disagree with the conclusions they reach.” It is true.

I am delighted to have met Dr. Shapiro and to write this letter to share the contribution he has made to my development of a standard of excellence in my career. Dr. David Shapiro is a brilliant surgeon, a man of integrity, and a pillar of teaching excellence. Although his primary responsibility is surgical patient care, he spends a great deal of time in direct teaching and it is my sincerest hope that this community considers maximizing student exposure to Dr. Shapiro well before the third year of medical school and ideally from the first year. 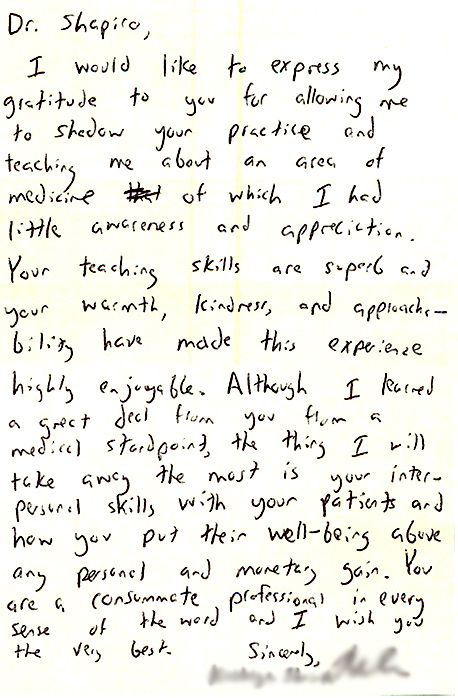 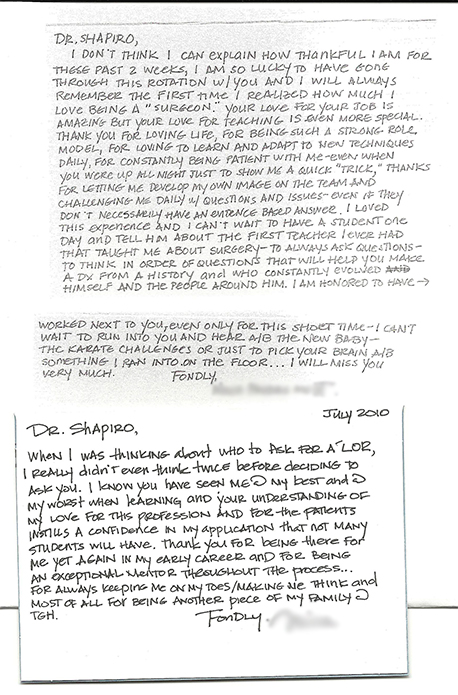 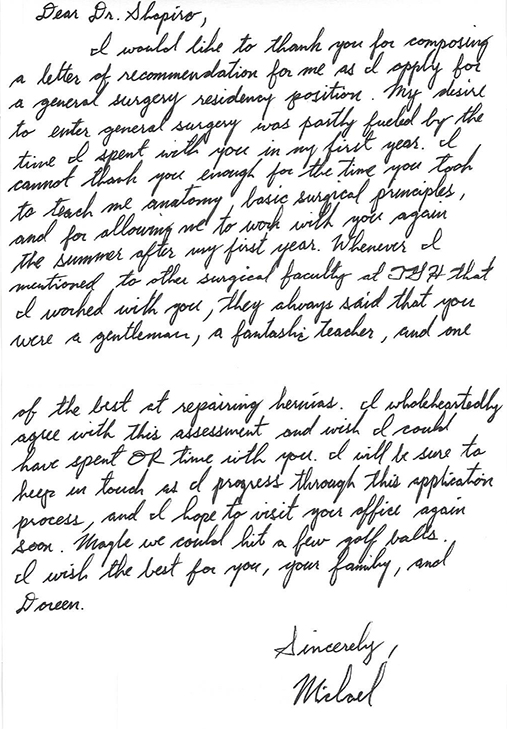 1. Call us
for a free consultation with a physician.
2. Arrange a visit
for a comprehensive evaluation with an MD and discuss the best treatment option for you.
3. Schedule the procedure
appropriate for you, performed in the office by an experienced professional.

* If our initial conversation leads to a full evaluation with a history and physical examination of your hemorrhoids, then a standard charge will apply. All fields required.

What Our Patients Have To Say